Are Gender Differences in Sports Nutrition a Myth?

One question that comes up every now and then is; should the sports nutrition advice we give to women be different to the advice we give to men? This idea originates from research that suggests women are able to utilise fat as an energy source at a higher rate compared to males.

The two graphs below are taken from a research study we conducted a few years ago. We took a group of six males and compared how much fat they burnt during a cycling test with 6 females. Our primary estimation of how much fat was being burnt during exercise was via oxygen consumption and carbon dioxide release (figure 1). Since the body is always using a mixture of fats and carbohydrates to supply energy demands, and fat can only be used as an energy source in conjunction with oxygen, a greater oxygen: carbon dioxide ratio indicates a greater reliance on fat metabolism compared to carbohydrate metabolism.

To support this estimation, we also collected blood lactate concentrations before and after the exercise test (figure 2). Lactate is produced by the body as an alternative energy fuel when intensity of exercise becomes too demanding for fat to be broken down. Therefore, a greater increase in blood lactate during exercise would suggest a greater suppression of fat as an energy source. Both results taken together along with other studies, suggest evidence that there is a subtle difference in the way males and females are able to burn fat during exercise. The question is, does this difference in metabolism require different Sports Nutrition guidelines in relevant areas?

Figure 1 Comparison between males and females of relative (%) contribution of fat as energy expenditure during cycling measured via oxygen consumption and carbon dioxide expiration. A slightly greater amount of energy is being produced by fat being burned by female cyclists. 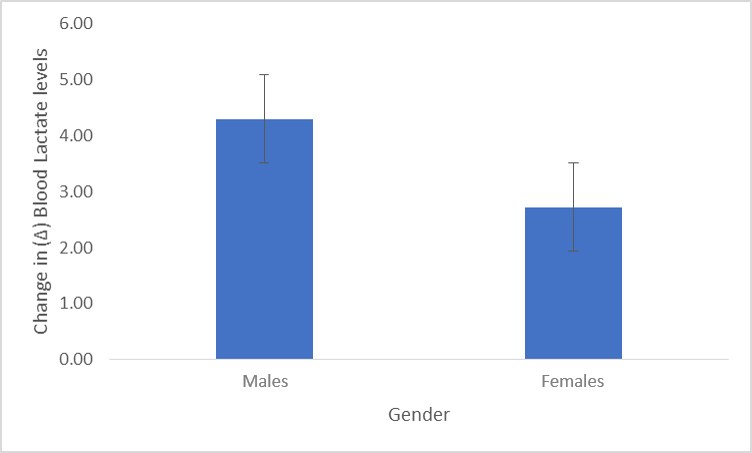 Figure 2 Comparison of blood lactate scores between males and females during cycling. A greater change (∆) is seen in males which indicates a greater suppression of fat being burned as energy.

At present, there is no evidence to suggest different carbohydrate loading strategies for males and females, despite the difference in the way genders can utilise fat and carbohydrate fuels during exercise. However, the ability to prepare for endurance events through carbohydrate loading may be somewhat limited to males. This is related to the task of eating such a high amount of carbohydrate (>0.8g/kg/day or >70% of daily energy intake). Although, these quantities are recommended to help exercise performance, the practical element of consuming these can be challenging. I have found this myself when preparing for events or when working with athletes who require an increased carbohydrate intake to support more than one training session per day or who are preparing for an event. This challenge exists for both males and females and comes down to each athlete on an individual level. Therefore, my general advice when carb-loading is to focus less on the specific numbers and more on increasing meal/snack frequency and portions whilst being mindful to regularly consume a good quality carbohydrate source.

Due to the difficulty of hitting carbohydrate targets pre-exercise via carbohydrate loading, it can be more beneficial to take a form of carbohydrate during exercise. For example, for any event that lasts longer than 60 mins, it can be advantageous to consume carbohydrate gels, drinks or foods depending on your preference.

The idea that males and females should follow separate guidelines is based on subtle differences in how each gender burns fat during exercise. However, there are many factors that determine which fuel source (carbohydrate or fat) predominates during exercise, such as habitual diet, exercise intensity, training status and even menstrual function. Currently, there is no evidence to suggest males and females should follow difference sports nutrition guidelines. However, it must be said, much of the research that has been done to inform guidelines is based on research conducted in males. Therefore, taking the existing guidelines and shaping them to best suit the individual is a much better approach.

Shaun Chapman is a Sport Nutrition consultant currently working with runners, cyclists powerlifters and people aiming to lose weight. With a background in football, Shaun has since competed in many running events, including 5km, 10km, OCR and half-marathon races. When he’s not marathon training, Shaun can be found in the gym working on his strength training.