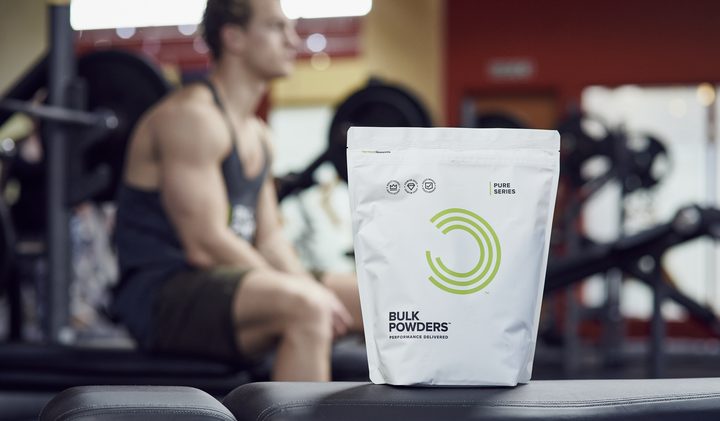 Arginine is an ingredient synonymous with pre-workout formulations, intense training sessions and pictures of massive, massive biceps. But, what exactly is arginine? Can it help beyond your workout? And, is there anything more to it than making you want to purchase ultra-tight t-shirts?

L-ARGININE – WHAT IS IT?

L-Arginine (also known as plain old Arginine) generally falls into the same category as L-Taurine, as a conditionally-essential amino acid. Under normal conditions the body is able to synthesise its own supply. However, demand for Arginine may sometimes exceed supply in active individuals, especially in times of physical exertion or high stress. This is where diet and supplementation comes into play.

Arginine can be found readily in foods such as chicken, beef, soya, dairy products and fish. It can also be found in every protein powder in the BULK POWDERS® range as well as plenty of popular arginine-containing compounds.

Arginine is commercially available in several forms. It can typically be found in its most raw form as L-Arginine or in formats such as Arginine Nitrate, Arginine Ethyl Ester, Di Arginine Malate and Arginine Alpha Ketogluterate (AAKG). Other than being a right mouthful, AAKG is the result of L-Arginine being joined to molecules of Alpha Ketogluterate, normally in a ratio of 2:1, this is done with the intention of increasing bioavailability.

Typical doses of Arginine in pre workout formulations are around 2-4g, whilst scientific studies will frequently test up to 6g per day. The general accepted safe level for oral administration is up to 20g per day but higher levels have been tested and shown no adverse side effects (along with what one can only assume were mad pumps).

If you read through the reviews of Arginine on any sports nutrition website, you’ll see people are using it for a number of reasons. We’re going to evaluate some of the most common in this article.

THE SCIENCE BEHIND THE PUMP

Once Nitric Oxide has been produced it acts on endothelial cells lining the blood vessels, causing them to dilate and relax. It stands to reason that if blood flow can be increased to the working muscles then oxygen and nutrient delivery will also be increased. More fuel equals more energy output, more energy output equals more reps and more reps equals more gym-related gains. So, now we know the theory behind its most popular use, what else can this amino acid do?

PROTEIN SYNTHESIS AND OTHER METABOLITES

So, we all already know that amino acids are the building blocks of proteins, what makes Arginine special in this respect? Not only is arginine necessary for protein synthesis, it is a direct precursor to many other amino acids, cell-signalling molecules and active compounds within the body. By undergoing a process known as transamination, it can be converted into L-Citrulline, Agmatine, Proline, Urea, L-Ornithine, Glutamate and Creatine.

Creatine is one of the most researched Sports Nutrition supplements in the world. Everyone agrees that supplementing with 3-5g per day can increase physical performance in high intensity exercise. However, a surprising amount of people don’t know that Creatine is naturally produced by the body and is essential to energy production.

The body turns over roughly 2g of Creatine per day (based on a 70kg male), a large amount of which is synthesised from amino acids such as Arginine. The Arginine in question can be obtained from the diet or through supplementation. This suggests that during times of high intensity exercise or high demand on the body, an increased intake of arginine may also be beneficial for energy levels and exercise performance.

The jury is currently out as to the effectiveness of Arginine supplementation for enhancing endurance exercise performance. In theory improved blood flow and delivery of oxygen and fuel along with improved removal of waste products should enhance performance. In practice however, results have been very mixed.

There have been some improvements seen with Arginine supplementation, but other studies have shown it to be no more effective than supplementing with placebo. More research is required before conclusions can be drawn either way on Arginine’s effectiveness here.

WHAT STACKS WELL WITH ARGININE?

As previously mentioned, L-Arginine is one of the staple ingredients in pre workouts around the world. Arginine is absorbed quickly by the body and tends to have a half-life of 1 – 2 hours after an oral dose. So, what can we add to Arginine to aid our goals?

For resistance exercise Citrulline and Arginine stack beautifully, so why not try adding some Citrulline Malate to further increase the pump. Citrulline is part of the cycle within the body which results in Nitric Oxide production. So, how is this beneficial over taking arginine alone?

Citrulline is converted first to L-Argininosuccinate, then to Arginine and finally into Nitric Oxide. This all takes time, so if you’re stacking the ingredients you’ll experience the fast NO release from the Arginine, followed by a delayed NO release from the citrulline. As a result you should find yourself still fully pumped at the end of your workout.

For endurance exercise, at least in theory Arginine should combine well with Omega 3 fatty acids. There is evidence that supplementation with Omega 3 can help to improve the health and function of the surface endothelial cells lining the blood vessels.

It has been demonstrated that supplementation with Omega 3 fatty acids significantly improved Nitric Oxide concentrations in the body, total oxygen uptake and the rate of total blood flow. It stands to reason that if improved endothelial function was combined with Arginine then working capacity should be even greater.

For getting massive, it’s too early to draw any conclusions. One study (Zadic et al, 2010) points towards combined Arginine and Ornithine supplementation for increasing levels of Growth Hormone and Insulin-like Growth Factor-1, two anabolic hormones that bodybuilders really care about. Whilst the results of this study are interesting, it’s important to note that there were only 17 subjects involved, so a lot more research would need to be done here before any claims could be made.

There’s so much more to Arginine than just providing a pump and the feeling of outrageously vascular arms. It’s an amino acid which is highly likely to have a number of beneficial effects on the body and there may be more to follow with future research.