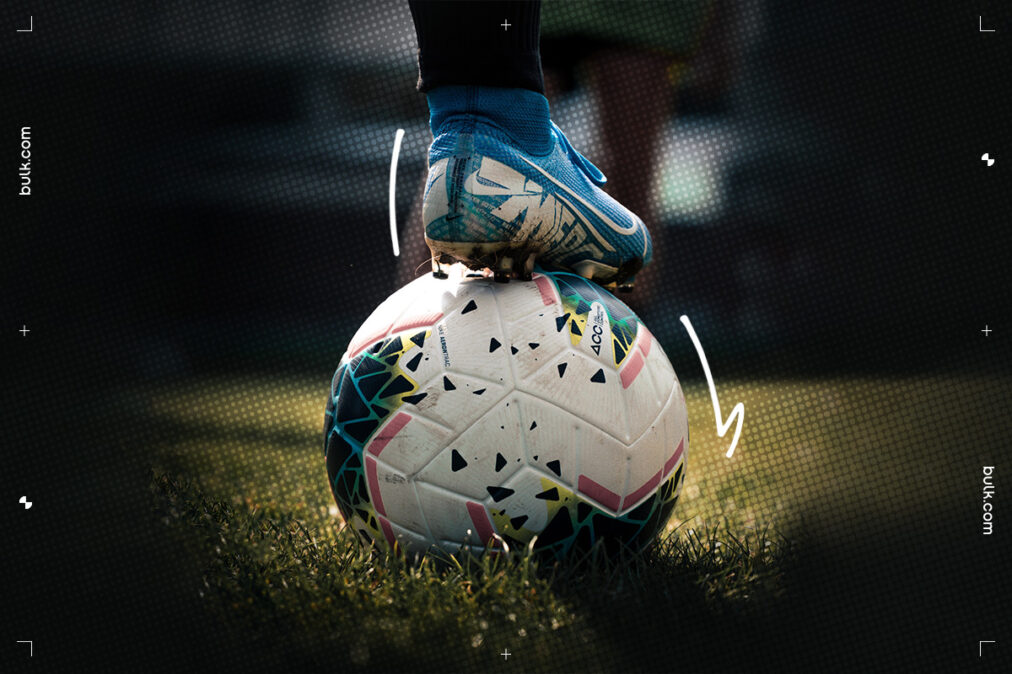 Football is a physical sport. Although strength and mass aren’t as important as in games like rugby, resistance training is a vital aspect of improving performance, especially at elite level. With the World Cup underway, we’ve looked at functional gym movements that can be directly applied to the beautiful game. In other words, the best gym exercises for footballers.

Before we dive into the movements, let’s have a discussion about whether lifting weights benefits footballing performance or hinders it.

It’s clear from many experts that a standard training programme that focuses on muscle hypertrophy is not optimal, primarily because there is excessive volume. More volume equates to more muscle, not better performance. It could also lead to more DOMS (delayed onset muscle soreness), which may affect skill-based training sessions.

So when lifting weights, the focus should be on enhancing strength in the right areas, relevant to actions during a game. Put simply, the goal should be to train movements, not muscles.

Do premier league footballers go to the gym?

“For a footballer, you don’t want to carry that extra muscle. For me, do I need to do bench press? No, not really”, said Wilson. “Lifting weights is not something I regularly do.”’

Antonio, despite personally holding a lot of muscle mass, said that he doesn’t lift weights either. “If I even look at weights, I bulk up instantly”, said the West Ham striker, “So if I’m going to do anything, it’s going to be core. If I put on weight, whether it be from muscle or not, it will make me slower. And I don’t want to lose my pace.”

This is an interesting perspective from two top-level footballers who already possess a high level of muscle and strength, partly due to gifted genetics. It’s worth considering that both of these players are strikers who like to play off the shoulder of defenders and therefore must prioritise pace over everything. If this conversation was with a target man or a centre-back, or a younger player with less physical development, they may have different priorities.

Now, let’s get into the football gym exercises.

When you see clips on documentaries like All or Nothing or an England training camp on YouTube, this movement pops up all the time. It’s the deadlift performed using a trap bar rather than a conventional barbell.

In our blog detailing how to increase your deadlift, we go into detail about the tremendous benefits of the movement. Its ability to stimulate everything from core strength, quads and the entire posterior chain makes it a surefire way to enhance overall strength. 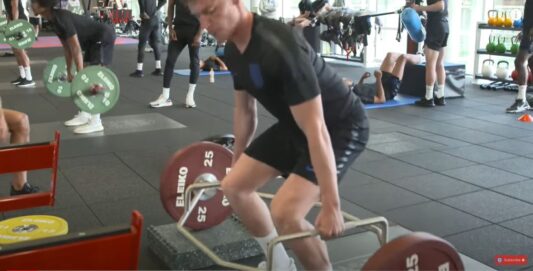 A strong back provides a solid foundation for a well-rounded, functional physique to rest on.

Lat pull-downs are a great compound movement that build mass and strength in the latissimus dorsi muscle – a key part of your posterior chain.

A solid posterior chain is essential for shielding the ball with your back to an opposition. Think of a broad-framed target man holding the ball up, a full-back seeing a ball out for a goal kick, or a midfield maestro keeping possession.

This movement mimics the in-game action of jumping for headers. Training with a heavier load improves the explosive power of his calves, hamstrings and quads. When jumping without the same load, it enhances jumping height. Picture Cristiano Ronaldo hanging in the air for a header, or Gianluigi Donnarumma claiming a cross.

Footballers are constantly accelerating and jumping off a single leg throughout a game. Alternating lunges will improve your explosive speed, which translates to everything from more effective dashes down the wing to higher leaps when defending corners.

The bench press is undoubtedly one of the best compound movements to build general upper-body strength, particularly the anterior chain. This includes the pectorals, anterior deltoids (front of your shoulders) and core.

Why is it useful for football? We heard striker Callum Wilson say he wouldn’t do bench press earlier, most likely because he fears losing his pace. That said, although players don’t need to possess excessive upper-body strength, having none at all can be very detrimental to performance. There are a lot of body-to-body actions in football, so a solid frame is needed to compete in physical battles.

The Bulgarian split squat can be performed in a number of ways. The most effective is to take a flat bench and dumbbells, place one foot on the bench, and lunge down while carrying the weights. Using a bench allows you to get a larger range of motion than a standard lunge.

A perfect example of training movements over muscles, this exercise is essential for a footballer’s rapid stops and changes of direction. You certainly won’t find many bodybuilders doing this, as it’s very much a movement that relates directly to the game itself.

The exercise increases strength in your quads, glutes and hamstrings. It also enhances balance and stability. All the work done on the hamstrings is crucial for football players – the stronger and more stable these muscles are, the more power from your legs when striking the ball.

This movement increases explosive power off the ground. Think about centre-backs challenging for leaders, or a goalkeeper launching from one leg to collect a cross.

We believe in encouraging everyone to find their passion for exercise. For more fitness content check out @bulk for recipes, ambassador workouts and gym tips and join our community of fitness lovers and foodies.

After doing Physical Education at A-Level, Harry was offered a place to study BSc Sport & Exercise Sciences at University of Birmingham, ranked as the number 1 course in the UK for Sport Science at the time. After a year, Harry realised it was the practical aspect of fitness he loves most, and switched things up for BA (Hons) Philosophy instead. Harry has over 10 years' practical experience in the gym and fitness, and has tried his hand at training everything from bodybuilding, powerlifting and long-distance running.