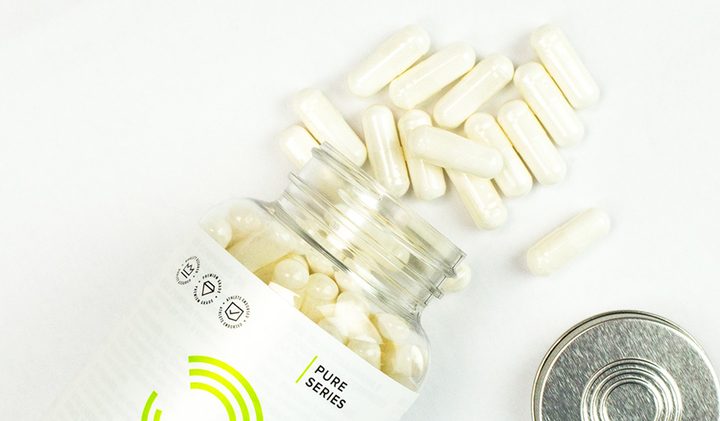 Joints, connective tissue and cartilage aren’t always the first thing you think of when putting in your monthly supplement order. However, as anyone who’s ever had an injury will know, they are very important to look after. The most well-known joint care products are probably Glucosamine, Omega 3 Fatty Acids and chondroitin. There are plenty of ways of consuming these – from individual pills and powders to multiple ingredients in one handy capsule, such as our Complete Joint Restore™.

For anyone needing a bit of extra encouragement to look after their joints, this article will explore the other potential benefits of the main joint-health products, along with a few more weird and wonderful ones that you may not have come across.

When you think of joint health, the first two which spring to mind are likely to be Glucosamine and Chondroitin. Glucosamine is a naturally occurring amino sugar which is obtained from the shells of shellfish. Glucosamine Sulphate also naturally occurs in the human body and can be found in high levels in the synovial fluid around the joints. Chondroitin forms a structural component of cartilage in the body.

Taking both in combination is a popular first-line treatment for individuals experiencing osteoarthritis or recovering from an injury. There is also ongoing research relating to the effect of supplementation on joint mobility.

Almost all of the research surrounding Glucosamine and Chondroitin focuses on the health of joints and cartilage. However, there is emerging evidence that these supplements may also help to reduce inflammation. As our typical diet in the West isn’t exactly regarded as the healthiest, anti-inflammatory foods and supplements are considered to be very important for general health.

Copper, Manganese and Vitamin C all carry health claims related to the normal formation of the body’s collagen and connective tissue which will directly affect joint health. It is also widely accepted that a good dietary intake of Omega 3 Fatty Acids, rich in DHA and EPA can benefit joint health.

Amongst other things, Copper plays a role in the normal functioning of the immune system whilst Manganese helps to protect cells from oxidative stress. Vitamin C also contributes to both of these health factors as well as helping the nervous system to function.

Omega 3 Fatty Acids are always top of my monthly supplements order because they have so many functions within the body. I won’t spend too long on this section as other articles on THE CORE™ cover Omegas in greater detail, but regular consumption benefits cardiovascular health, brain function and vision to name a few. A decent multivitamin and Omega 3 supplement (such as PROM3GA™) will cover your requirements for healthy fatty acids.

Cissus Quadrangularis has been used for centuries as an Ayruvedic treatment. It is a natural source of ketosterones which sound a lot like something you’d take if you wanted arms like Arnie. Sadly this didn’t appear to be the case when Cissus was put to the test; individuals taking Cissus packed on no more muscle than those taking a placebo when both groups undertook the same training program.

However, Cissus is very beneficial to joint health and mobility as well as coping with residual pain from injuries. In addition to the primary use as a joint health supplement, several human studies support the use of Cissus Quadrangularis for weight management and bone fracture healing.

With regards to weight management, Cissus has most successfully been used as a weight loss agent in combination with other popular ‘diet’ ingredients including B Vitamins, Green Tea Extract and Chromium.

Julius Oben carried out several studies (2006, 2007 and 2008) relating to Cissus supplementation and factors of the Metabolic Syndrome. Significant improvements were shown vs placebo in body weight, body fat, cholesterol levels and fasting blood sugar. Whilst these improvements can’t solely be attributed to Cissus due to the use of other ingredients, they certainly are interesting.

Initial human-based studies on bone fracture healing have shown very positive results. Through the use of Cissus, fracture healing has been decreased by two to three weeks, a very significant time period when it comes to quite literally getting people back on their feet. Animal studies are also heavily in favour of the ability of Cissus to heal and further human studies are definitely required.

Now, this is an interesting supplement. Curcumin is the active component of the spice Turmeric and may benefit joint health due to its ability to attenuate inflammation in the body. There is emerging evidence that it can also act as an analgesic (provide pain relief). Some people are attracted to the natural aspect of Curcumin, whilst others believe it may help them to avoid undesirable side effects experienced from prolonged use of over the counter medications. There is currently a health claim being reviewed relating to Curcumin and inflammation.

In addition, Curcumin is regarded as a powerful antioxidant. Regular consumption of Curcumin has been demonstrated to aid the body’s antioxidant defences as well as reducing the activity of pro-oxidants such as Superoxide Dismutase. As discussed earlier in the article, getting enough dietary antioxidants is hugely important. Curcumin is a bit of a two for the price of one deal in this case. Not only is it good for you, it also tastes great when consumed in the form of Turmeric. Bring on the curry!

It is highly likely that Curcumin will receive a lot more attention in the near future. So in the meantime it could be a wise move to stock up on some of our Curcumin and Vitamin D3 Capsules.

Bear with me here, I’m not trying to derail the article into an episode of Saturday Kitchen… Various types of ginger have been used for centuries as a traditional herbal remedy for a number of maladies. There is also evidence that they can benefit joint health.

Well controlled human research on ginger is still in its early days and there is definitely a lot of work left to do. However, it has been shown to be effective at reducing chronic pain and acting as a powerful anti-inflammatory; gingerols and zingerones are the active compounds credited with these effects. Supplementation with ginger powder at 750mg per day has been shown to be effective at combatting pain when combined with traditional anti-inflammatory drugs. The exact methodology behind this remains to be established but it is an interesting area for further investigation.

Ginger has also been credited with raising energy expenditure and aiding weight loss, making it a popular ingredient in many thermogenic formulas. At the moment we have not got enough human evidence to rule one way or the other on this but further research is definitely warranted.

Methylsulfonylmethane is another popular joint care product which may hold benefits beyond injury prevention and recovery. Referred to as MSM (for obvious reasons) there is evidence that supplementation with a large dose of this compound can help to attenuate exercise-induced oxidative stress and therefore *may* help to improve recovery times after exercise.

A study in 2011 looked at the effect of 10 days of MSM supplementation on markers of oxidation in the blood following an exhaustive exercise test in healthy young men. It was found that those supplemented with a high dose of MSM (50mg per kg of bodyweight) had significantly lower levels of oxidative markers in their blood post-exercise. It is a popular theory that reducing oxidative stress in the body may help to speed up the process of recovery, but further studies would need to be conducted before any conclusions could be drawn.

It is clear that there is a lot more to joint care products than simply recovering from injuries! We’d actively encourage you to look after your cartilage, connective tissue and synovial fluid as these can all help to maintain or improve quality of life.

Oben, J.E. et al (2007). The effect of Cissus Quadrangularis (CQR-300) and a Cissus Formulation (CORE) on obesity and obesity-induced oxidative stress. Lipids in Health and Disease. 6(4).

Paramdeep G. (2013) Efficacy and tolerability of ginger (Zingiber officinale) in patients of osteoarthritis of knee. Indian Journal of Physiology and Pharmacology. 57(2), 177-83.