BULK POWDERS™ caught up with James DeGale yesterday at the media day for his upcoming IBF world title fight against Andre Dirrell. The media day, held at Stonebridge Amateur Boxing Club in North West London, was very well attended with journalists from all of the main newspapers and television stations.

Once the buzz of journalists had subsided, we took the opportunity to ask James some questions of our own. 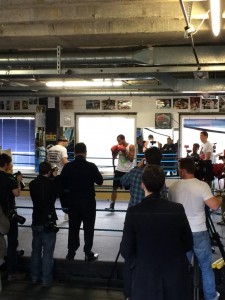 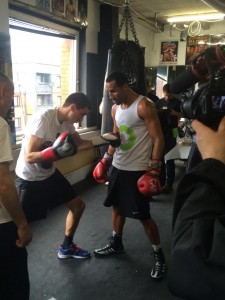 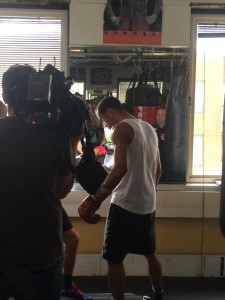 BULK POWDERS (BP): James, you’re probably sick of questions now so we’ll keep this short.
James DeGale (JDG): Actually, I don’t mind. I enjoy interacting with the press – I appreciate they’ve taken the time to come and see me.
BP: You don’t find it a chore?
JDG: No, not at all.

BP: A common theme running throughout your interviews, has been your quest to become the first British boxer to win an Olympic gold medal for GB and also a professional world title. Do you find that’s creating extra pressure on you? Surely there’s enough pressure with a world title fight as it is.
JDG: I’d say it brings extra motivation rather than extra pressure.
BP: You don’t feel any extra pressure?
JDG: Of course, there is pressure. I’m used to dealing with pressure though. My fight against Periban was a lot of pressure – I was voluntarily fighting a top level guy and I was putting my shot at a world title on the line. An Olympic final is a lot of pressure – it’s not unusual for me.

BP: This has been a long training camp for you – how are you feeling?
JDG: Boxers always say this, but I feel fantastic. I’ve taken a week off during camp and have ensured I’m getting the right amount of rest.
BP: You look in good shape – what do you put this down to?
JDG: Lots of things – I’ve got a bit fitter and a bit stronger every camp I’ve done. This is my 22nd fight so that’s a lot of improvements. My weight is better for this fight than it has ever been – training and having my nutrition spot on has put me in a good place. I’ve been living like a hermit for ages now!

BP: What part has sports nutrition and BULK POWDERS™ played in your preparation?
JDG: An important part. My trainer, Jim McDonnell, works me hard and two things he’s always drilling in to me are nutrition and recovery. Without those two, the training will suffer.
BP: What products have you used for this camp?
JDG: A fair few, but my favourites have been Pure Whey Protein™ (I love Banana Fudge!) and Protein Porridge™.

BP: We’re pretty much two weeks from fight night – what are you plans from here on in?
JDG: I fly to Miami in a few days to finish training camp and then head to Boston a few days before the fight.
BP: What will your training look like for the rest of camp?
JDG: I’ll have to see what Jim’s got in store for me! A lot of the hard work is done, but there are still a few tough sessions to go!
BP: Thanks for talking to us, James – we’ll see you shortly out in Boston!
JDG: I can’t wait!